Paper Paper folding originated in China around the first or second century A.D. and reached Japan by the sixth century. The Japanese called this new art form origami (the name coined from ori, “to fold,” and gami, “paper”) and cultivated it as an art of understatement. Origami suggests; it implies without announcing outright, intimates with out brashness. It exists best in a kind of light the Japanese call ke, a soft, gentle light for intimate occasions. Why use a bright light when you can see in a dim one? Why shout when you can whisper? For that matter, why draw the entire bamboo tree when a few brush strokes suffice? Just as a three-line haiku evokes a setting or a season, the placement of a rock and a pond in a Japanese garden recalls the universe. It is a short imaginative leap from the rock to a mountain, from the pond to the sea.

Origami is an art of economy. A few simple creases evoke an animal; modify the sequence slightly, and an entirely new beast appears. To the Japanese sensibility, the success of a completed origami figure depends on the creator’s eye for form, structure, and proportion. Does it capture the creature’s true form, the placement of its head and limbs, the shape of its shoulders and hips? Does it suggest the animal’s motion, its stride, glide, or gallop? And finally, is the paper figure a mere likeness of the original, or does it delve deeper, into its essential character?

Over many generations, the Japanese developed and refined a small repertoire of models that are stylized and abstract, often involving cuts and painted or printed details. (For a while, the Chinese produced their own individualized models, including the famous Chinese junk, but their work was soon subsumed into the Japanese tradition.) By the Heian period, from 794 to 1 185, origami had become a significant part of the ceremonial life of the Japanese nobility. Since paper was still a rare and precious commodity, paper folding was a diversion only the rich could afford. Samurai warriors exchanged gifts adorned with noshi, good-luck tokens of folded paper and strips of abalone or dried meat. Shinto noble men celebrated weddings with glasses of sake, rice wine, wrapped in male and female paper butterflies representing the bride and groom. Tea ceremony masters received their diplomas specially folded to prevent misuse in case the documents should fall into the wrong hands (Once the paper was opened, it could not be resealed without allowing extra creases to show.) Even today, the expression origami tsuki means “certified” or “guaranteed.”

When paper became inexpensive enough to be used by everyone, origami assumed a new ceremonial role, as a means of social stratification. During the Muromachi period, a time of military rule from 1338 to 1573, origami styles served to distinguish the aristocratic samurai – who folded in the so-called Ise manner – from farmers and peasants, followers of the school of Ogasawara. People knew their place, and they folded accordingly.

The democratization of origami came only in the Tokugawa period, from 1603 to 1867, the great efflorescence of Japanese art and culture often likened to the Elizabethan Age in England. The Tokugawa period saw the emergence of the bird base, documented in the oldest surviving publication on origami, the Senbazuru Orikata (“How to Fold One Thousand Cranes”) of 1797. The Tokugawa period also witnessed the publication in 1845 of the Kan no mado (“Window on Midwinter”), the first comprehensive collection of origami figures, which includes the first appearance of the frog base.

With the development of the frog base, origami acquired still another ceremonial usage. In Japanese the word for “frog” and the verb for “to return” are pronounced the same way, and it became customary for a geisha to pin a paper frog to a pillar after entertaining a favorite patron, in the hope that he would return. With the union of these two universal pastimes, origami had become the consummately democratic art form. But there were few other developments, and until the resurgence of origami in this century, only about 150 simple models, handed down from generation to generation, remained to attest to a millennium of Japanese folding.

The Japanese were not, however, the only ones to cultivate paper folding. It developed simultaneously under the Moors, Muslims who flourished in North Africa and brought paper folding to Spain when they invaded in the eighth century. The Moors were expert mathematicians and astronomers (they gave us Arabic numerals and the term algebra), and they instilled paper folding with the principles of geometry. What a pity it is that they did not allow themselves to make representational figures! This practice (to echo Escher) would have contradicted Islam. Instead, they investigated the many folding properties of the square, much as they explored ways of covering the walls of the Alhambra with tessellations and applied their advanced knowledge of trigonometry to mapping the stars.

The Moors’ activity flourished throughout the High Middle Ages, and if they had not been expelled during the Spanish Inquisition, folding might today be considered a predominantly Spanish pastime. Nevertheless, an indigenous tradition of folding survived in Spain to the early twentieth century, when it came under the tutelage of philosopher and poet Miguel de Unamuno (1864-1936). Unamuno wrote two treatises on paper folding and was a popular figure in Salamanca, where he could often be seen folding animals while sipping his midday coffee at a cafe. (By then, the restriction on representational origami had lapsed.) Many of Unamuno’s creations and those of his followers are still in the repertoire, and an Unamuno “school” exists in Spain and South America even today.

It remained for twentieth-century folders to tie the two strands together. The inheritors of the Japanese and Moorish traditions now communicate freely through books, magazines, and conferences, the result of movements that have sprung up throughout the world. The dissemination of Japanese aesthetics throughout Europe and America and of Western science in Japan has produced a new generation of paper folders equally at home in both traditions. And a remarkable cross- fertilization has taken place.

In the West, where origami is most widely practiced by children, it has never achieved the status of an art. For generations, European and American schoolchildren have made water bombs and fortune-tellers, flapping birds and jumping frogs. The highly ordered process of folding is their means of apprehending nature in a systematic way: It imposes a rigid order on the flux of the external world and gives them mastery over their environment. I believe that in this child’s impulse lies a key to creativity. The fundamental urge to discover order in a nebulous world – or to impose it on the world – remains with us as we grow older, and it is one of the underpinnings of both art and science. It is hardly surprising that educators from Friedrich Froebel, the nineteenth-century inventor of Froebel blocks, to Laszlo Moholy-Nagy, a leader of the Bauhaus, incorporated paper folding exercises into their lessons.

But a child’s activity – especially one in a perishable medium, like paper – is a suspect art, with little cachet and even less commercial value. Here, in America, paper is made to be discarded: There are always more trees. Not so in Japan, where the wrapping is often more valuable than the gift.

In this country, origami was taken up not by artists but by mathematicians. Its practitioners are scientists, engineers, and architects, heirs to the Moorish tradition of paperfolding. Enter a new set of aesthetic standards, the values of the geometer. The mathematician’s idea of beauty draws its inspiration from an ideal world, a world of regularity, pattern, and order. Beauty is identified by simplicity and economy: the brevity of a proof, the compactness of a crystal, the symmetry of the Moorish mosaics at the Alhambra. Euclid’s axioms, the Pythagorean theorem, harmonic motion, and the four-color-map theorem achieve maximal ends through minimal means. Why use more colors if four suffice?

To the mathematician, the beauty of origami is its simple geometry. The mathematician asks: Does the finished design make the greatest use of the existing geometry? Is the folding procedure elegant and pristine, with crisp lines, compact folds, simple and regular proportions? Is there no wasted paper, awkward thickness, or arbitrary fold? Is utility served in each step?

Today, a work of origami must exemplify both the artist’s and the mathematician’s standards of beauty. It must be anatomically accurate – an American demand, not a Japanese one – yet suggest more than it shows. It may employ folding techniques that are unexpected, but never arbitrary, and whose logic may become clear only when the entire figure has been completed. To the folder who meets these demands head-on, the constraints of the medium are not a limitation but a stimulus to greater imagination.

From the book ” Origami from Angelfish to Zen” by Peter Engel 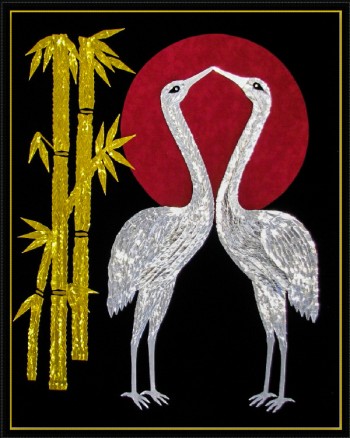